Wild Law is a groundbreaking approach to law that stresses human dependence on nature. For the first time, this volume brings together voices from the leading proponents of wild law around the world.

Exploring Wild Law, The Philosophy of Earth Jurisprudence introduces readers to the idea of wild law and considers its relationship to environmental law, the rights of nature, science, religion, property law and international governance.

Compiled and edited by Peter Burdon, Exploring Wild Law is a collection of essays written by leaders in the field of Earth Jurisprudence! Among the authors are Thomas Berry, Ng’ang’a Thiong’o, Peter Burdon, Cormac Cullinan, Klaus Bosselmann, Linda Sheehan, Mari Margil, Judith E. Koons and many others.

‘Wild law is a gathering force beginning to sweep around the world. This
excellent compendium is a must for all those who wish to practise it.’
– James Thornton, CEO ClientEarth

Released April 20, 2011 of The Rights of Nature, The Case for a Universal Declaration on the Rights of Mother Earth. This brilliant new book is co-produced by Global Exchange, the Council of Canadians, The Pachamama Alliance, and Fundacion Pachamama.

“The Rights of Nature, The Case for a Universal Declaration on the Rights of Mother Earth gathers the unique wisdom of indigenous cultures, scientists, environmental activists, lawyers, and small farmers in order to make a case for how and why humans must work to change our current structures of law to recognize that nature has inherent rights.  It includes essays and interviews from esteemed thought leaders such as Maude Barlow, Vandana Shiva, Desmond Tutu, Cormac Cullinan, Edwardo Galleano, Nimo Bassey, Thomas Goldtooth, and Shannon Biggs.

A newly updated edition of Cormac Cullinan’s seminal work, Wild Law: A Manifesto for Earth Justice was released April 19, 2011 in the US. The new release is NOW AVAILABLE for order through Amazon.com!

“Wild Law is a stimulating, eminently readable response to our governance crisis. The survival of our species and health of the Earth family depends on our ability to transform governance systems so that humans become part of the ecological matrix of biological and cultural diversity. This book is a milestone on that path.”

—Dr. Vandana Shiva, President of the Research Foundation for Science, Technology and Ecology, and author of Staying Alive and Water Wars

“This book of Cormac Cullinan explains with great clarity how we can change our entire approach to governance so that we can continue life on a liveable planet. In its basic outlines this book is one of the finest contributions to the entire field of jurisprudence in recent times.”
— Thomas Berry, author of The Dream of the Earth, The Universe Story and The Great Work

This report takes a look at the flaws behind the Green Economy agenda and explores in depth the ways in which Rights of Nature can be applied as a legal framework to help solve many of the problems currently plaguing the environment. 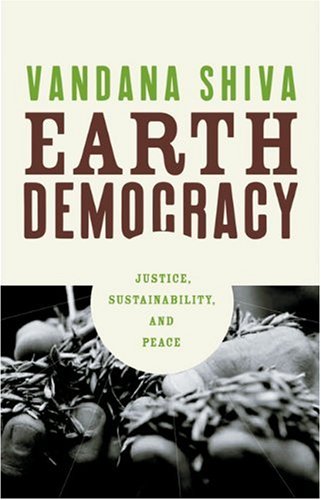 A leading voice in the struggle for global justice, Vandana Shiva is a world-renowned environmental activist and physicist. In Earth Democracy, Shiva updates the struggles she helped bring to international attention—against genetic food engineering, culture theft, and natural resource privatization-—uncovering their links to the rising tide of fundamentalism, violence against women, and planetary death.

Among the ten principles of Earth Democracy Dr Shiva outlines are :
– All species, peoples and cultures have intrinsic worth.
– All beings have a natural right to sustenance which is the right to life.
– Earth Democracy is a living democracy.

Blue Future: Protecting Water for People and the Planet Forever

The final book in Maude Barlow’s Blue trilogy, Blue Future: Protecting Water for People and the Planet Forever is a powerful, penetrating, and timely look at the global water crisis — and what we can do to prevent it.

The global water crisis has dramatically deepened. The stage is being set for drought on an unprecedented scale, mass starvation, and the migration of millions of refugees leaving parched lands in search of water. The story does not need to end in tragedy.

The final installment in Barlow’s Blue trilogy, Blue Future includes inspiring stories of struggle and resistance from marginalized communities, as well as examples of government policies that work for people and the planet. A call to action to create a water-secure world, it is, in the end, a book of hope.

Thanks to favorable climatic conditions and fertile and rich habitats of biodiversity, we have prospered for millennia. However, for two centuries, we have also mistreated the ecosystem that shelters us and feeds us because we evolve as groundless, isolated from the rest of the living, forgetting that we are beings of nature.
We must relearn, like the first peoples, our role as guardians. We must find the path of a harmonious cohabitation with trees, plants and animals but also between us. This approach requires lowering our economic weapons, questioning our relationship with property, limiting state sovereignty, and rethinking democracy. Finally, it requires us to recognize that nature has the right to exist and regenerate. This is how we can guarantee future generations the right to live in a healthy and sustainable environment.
As a preface: a few lines from Edgar Morin, because the ideas expressed in this book resonate with those he defends.

Peoples and societies are dispossessed of their livelihoods around the world by the destruction of their environment. Faced with this ecocide, how to rethink human rights?
Ecocide (destroying the “house earth”) is not another crime, adding to all other human rights abuses. It is now the first crime, one that ruins the very conditions of habitability of the Earth.Already, current disruptions are fueling injustices and geopolitical tensions, while the world’s pundits remain unpunished.
It is therefore urgent to demand new forms of responsibility and solidarity. Urgent to redefine a new meaning and new frameworks for human action within the planetary boundaries.International law must be metamorphosed and universalized around a new pivotal value, the Earth ecosystem, by recognizing a fifth international crime, the “crime of ecocide ».
available on paperback and kindle edition : https://www.amazon.com/nouveau-droit-Terre-finir-lécocide-ebook/dp/B01LZJ46DH/
(The book will be available with its translation to English soon)

This collective work brings together specialists and theoreticians on rights of nature and law, under the aegis of the Global Alliance for the Rights of Nature, End Ecocide on Earth and NatureRights.

This is a gap in international law: nothing today allows victims of environmental injustices to claim the application of their rights.No sanctions are foreseen for those who threaten the rights of nature while the durability of the conditions of life on earth is at stake.Rights of Nature must grant ecosystems rights to exist that can be claimed in court. They propose recognizing the crime of “ecocide” for the most serious environmental crimes that states and corporations not only allow, but sometimes encourage.These principles make it possible to consider nature as a subject of rights rather than an object. This calls into question our conception of the place of nature in relation to humanity. For there can be no human rights and the rights of current and future generations to enjoy a healthy and viable environment without the recognition of the rights of nature and the emergence of new global governance models.

This book was written in the framework of the third International Tribunal for the Rights of Nature held in Paris in December 2015, in parallel with COP21.

To read the summary, the preface and the introduction> click here

Should Trees Having Standings, Christopher Stone

In this collection of essays on Law, Morality and the Environment, Professor Christopher Stone presents the question, Should Trees Have Standing? Professor Stoneargues that natural objects, such as trees, should have legal rights through the appointment of guardians designated to protect them.

Originally published in 1972, Christopher Stone’s Should Trees Have Standing? ignited a furor and an endorsement by Chief Justice Marshall. Republished in 2010, Stone updates his original thesis and explores the impact of his question and thinking on our judicial system and on society as a whole. Enduring, thought provoking work.

Wild Law, A Manifesto for Earth Justice, Cormac Cullinan – First published in 2002, released in 2011 both in the United States and South Africa.  Additional information is provided with recent publications above.

The Rights of Nature: A History of Environmental Ethics (History of American Thought and Culture), by Roderick Frazier Nash  November 15, 1989

Mt. Shasta, California took a stand for protecting the Rights of water aquifers and the right of the community of Mt. Shasta to decide what happens in their community.

Be The Change, How to Get What You Want in Your Community

Should Trees Have Standing? and other essays on law, morals and the environment, Christopher D. Stone

The Rights of Nature, A History of Environmental Ethics, Roderick Frazier Nash

The Dream of the Earth, Thomas Berry

“Los Derechos Oceánicos: Una Ruta Hacia un Futuro Habitable (Spanish Edition) Kindle Edition is now available on Amazon in english and spanish- at only $1.99 for the first 2 weeks! You can not only learn about the movement and the ocean, but support ELC by purchasing, sharing and leaving a review today!

Click below for spanish and here for english: https://amzn.to/33UowIk

stay tuned to our latest information!

This website uses cookies to improve your experience while you navigate through the website. Out of these, the cookies that are categorized as necessary are stored on your browser as they are essential for the working of basic functionalities of the website. We also use third-party cookies that help us analyze and understand how you use this website. These cookies will be stored in your browser only with your consent. You also have the option to opt-out of these cookies. But opting out of some of these cookies may affect your browsing experience.
Necessary Always Enabled

Any cookies that may not be particularly necessary for the website to function and is used specifically to collect user personal data via analytics, ads, other embedded contents are termed as non-necessary cookies. It is mandatory to procure user consent prior to running these cookies on your website.